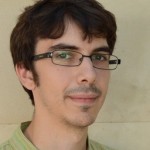 The vibrational properties of solids are usually studied within the harmonic approximation, which is valid when the motion of the atomic nuclei is restricted to the neighbourhood of their equilibrium positions. This approximation is usually very good when investigating standard solids under normal conditions. However, for the lighter nuclei and at high temperatures, atoms explore regions far away from their equilibrium positions, and the harmonic approximation is no longer valid.

We have worked on a methodology to study the vibrational properties of solids beyond the harmonic approximation. We map the Born-Oppenheimer energy surface on which the atoms move along phonon modes, and then solve the resulting equations self-consistently within a mean-field formalism. We then calculate phonon expectation values from the anharmonic phonon wave function. This allows us to investigate physical properties such as the electronic band gap renormalisation due to electron-phonon coupling, or thermal expansion using the stress tensor [PRB 87, 144302 (2013)].

The first applications of this methodology have included the study of systems comprising of the lightest elements: hydrogen and helium. For hydrogen we have investigated the dissociation of molecular solid hydrogen at high pressure with quantum Monte Carlo calculations for the electronic part, and anharmonic vibrational calculations for the nuclear part. We have predicted a dissociation pressure of 370 GPa, within reach of static diamond anvil cell experiments in the near future. This work has been done in collaboration with Sam Azadi and Matthew Foulkes. For helium, we have calculated the effects of electron-phonon coupling on the metallization transition, predicting a strong zero-point correction and temperature dependence, both increasing the static lattice metallization pressure. This result has implications in the area of white dwarf cooling. This work has been done in collaboration with Chris Pickard.