CASINO is a computer program system for performing quantum Monte Carlo (QMC) electronic structure calculations that has been developed by a group of reseachers initially working in the Theory of Condensed Matter group in the Cambridge University physics department, and their collaborators, over more than 20 years.  It is capable of calculating incredibly accurate solutions to the Schrödinger equation of quantum mechanics for realistic systems built from atoms. This helps us understand and predict the nature of the Universe (as well as, you know, helping us to design drugs and superconductors and write grant applications).  Other highly accurate methods are known that can do this of course, but what makes CASINO important is that – given a big enough computer – it can carry on doing this for systems containing hundreds or even thousands of atoms. These many atoms can form isolated giant molecules or groups of molecules, or they can be the repeating unit in an infinite crystal periodic in one, two, or three dimensions. Because of their inferior scaling with system size, competing methods of comparable accuracy generally struggle to handle more than a few tens of atoms. 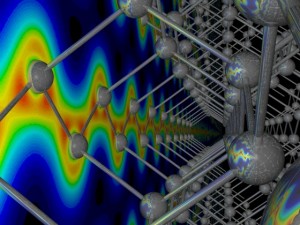 CASINO is also important because QMC is one of the few methods genuinely capable of exploiting the power of modern computer hardware. The man in the street has probably noticed that computers stopped becoming faster because of increasing CPU frequency many years ago, and almost all modern performance improvements are down to increasing parallelism. The world’s fastest computers now have in excess of a million processor cores, and even your phone probably has at least four. You might expect that if you double the number of processing cores then the code would go twice as fast. Sadly for most popular methods in computational electronic structure  – such as density functional theory – this stops being true very quickly as too much interprocessor communication is required. If you run the calculations on much more than a thousand cores, then they often start to slow down. Modern versions of CASINO, by contrast, have been shown to exhibit essentially perfect parallel efficiency when accumulating statistical averages on machines with hundreds of thousands of cores in all of its various modes of operation.  The largest such CASINO calculations that we are aware of have been done are up to 524288 cores on Japan’s K-computer by Mike Towler – our good friend and colleague Ryo Maezono tells me the local sysadmins were ‘shocked‘. The following diagram shows the ideal parallel efficiency achieved on up to 120000 cores of JaguarPF (a now defunct Cray XT5 at Oak Ridge National Lab) with CASINO (the red curve is for an earlier version of CASINO). The second graph is the one for the K computer up to over half a million processor cores. 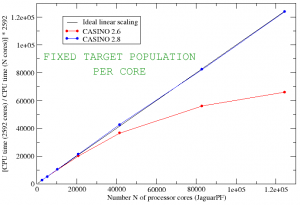 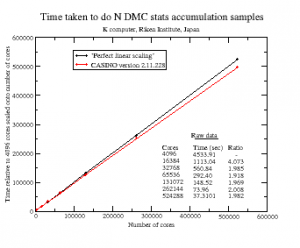 We would add similar data for common DFT codes but it usually wouldn’t be visible on this scale.

The QMC research program that culminated in CASINO as we know it today was begun  in the early 1990s by Richard Needs,  who had obtained inspiration from a short period working in the United States. He developed his initial ideas in collaboration with Guna Rajagopal and Matthew Foulkes and a number of early postdocs and students. Their initial test codes were gathered together and generalized into the first QMC program capable of treating any arbitrary system (named ‘CASINO’ after a suggestion  from  Paul Kent) by Mike Towler, who had arrived in Cambridge in late 1996.  The first public version of CASINO was published in 1999. Absolutely fundamental improvements and generalizations of the code were made by Neil Drummond (from 2002) and Pablo López Ríos (from 2004).  Needs, Towler, Drummond and López Ríos are now considered to be principal authors of the code, and all four of them continue to be at the heart of the project today. Sadly, CASINO was thrown off the Cambridge TCM group computer systems in September 2019 at the insistence of local computer management, despite Richard still working in the group, and as a result it is no longer possible to refer to it as the ‘Cambridge quantum Monte Carlo code’ .

CASINO is written entirely in standard-conforming Fortran 2003 using modern software design methods (yes, urban metrosexuals – Fortran is modern! Try writing this in Ruby on Rails or whatever is fashionable nowadays, and watch how quickly Fortran blows you out of the water). It’s supposed to be easy to use, easy to install, and easy to read and understand. It contains a self-documenting help system and comes with a helpful manual and examples. The distribution comes with a very large number of utilities and additional programs to help with analysis, running the code, and preparing the input. It is straightforward to mount CASINO across a variety of platforms (including workstations, weakly-linked clusters, massively parallel supercomputers, laptops and PCs. The Android app is in preparation). It uses standard MPI functions to work on parallel machines, but will work without it on single processors (having its own ‘fake’ serial MPI library). It can also make use of  shared memory (Systems V, Posix, or nasty, buggy Blue Gene/Q Posix) whereby all MPI processes on, say, each 16-core node are able to access a common copy of selected large arrays, and OpenMP (which we use to implement a ‘second level’ of parallelization in which each MPI process can spawn a number of threads which parallelize over stuff like the number of electrons  or orbitals).

For interested people who know what it means, a technical listing of CASINO’s scientific capabilities is as follows:

And apart from all that it’s just way cooler than any other QMC code, especially the one that Lucas wrote.